How can we reduce noise in the workplace? | Office design London

How can we reduce noise in the workplace?

There can be no question that prolonged exposure to office noise can have a detrimental effect on our ability to perform well at work. This, in turn, can have a negative impact upon the efficiency of the organisation at all levels. Unsurprisingly, a much higher percentage of people – around 60% in fact – who work in open plan offices will complain about the impact of office noise on their ability to carry out their role successfully compared to those who work in cellular offices – as low as 6%.

Research has shown that loud sounds and prolonged exposure to certain noises can trigger stress responses, such as a rise in blood pressure and heart rate, in our bodies. Not only that, sounds that office workers are exposed to – conversations and ringing telephones, for example – can affect the rhythm and rate of our hearts. Even occasional exposure to loud noises can lead to higher long-term stress hormone levels and hypertension.

Typically, there are two situations where noise can be a nuisance: privacy and reverberation. Here we look at the two types in more detail and examine the steps that can be taken to reduce them in the workplace. 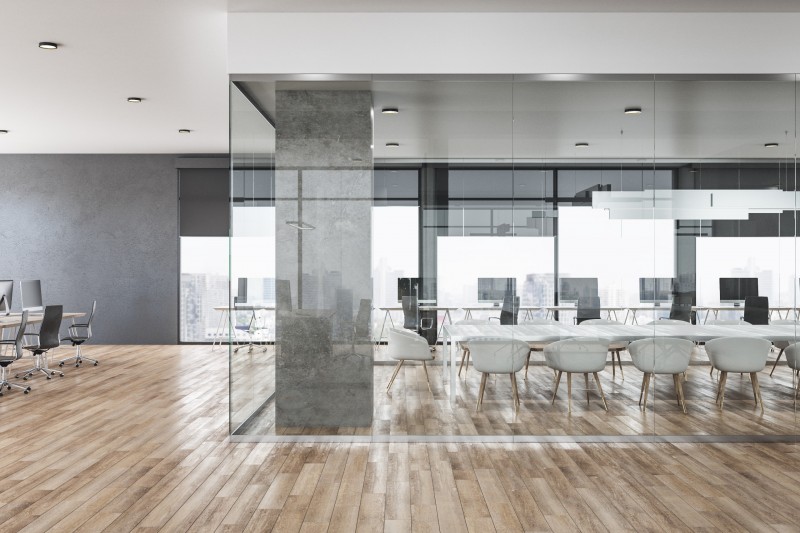 Privacy noise is generally when we can hear sounds that we shouldn’t be able to hear in a particular place, such as hearing speech through a wall. The quality of the wall itself will have a bearing on how much sound is heard, and any partition will have what is called a dB rating. The rating refers to sound reduction, so if a wall has a dB rating of 50, for example, and 80dB sound is emitted on one side of the wall, the noise level on the other side will be 30dB. Generally, to reduce sound transference you need mass, but an air cavity and a layer of rockwool insulation can also help.

Walls normally have a vertical stud with two layers of 12.5mm thick plasterboard on either side. The stud is usually 50mm thick, creating the cavity which is half filled with a 25mm layer of rockwool. To reduce noise further, it is possible to include a larger stud/cavity or to use acoustic plasterboard which is 15mm thick and much heavier. Walls are normally built from the floor to the suspended ceiling, so unless you fill the cavity between the suspended ceiling, the base build soffit and the cavity under the raised floor as well, you could just be wasting your money if you only upgrade the type of plasterboard used in the wall construction.

Glass walls can also vary, with a standard 12mm glass performing significantly worse than a solid wall. There is a 12.8mm thick acoustic glass product that is very effective at eliminating unwanted noise in the office; this comprises two sheets which are laminated together with an acoustic film in between. However, while this can reliably reduce the amount of unwelcome noise, it is rather expensive, so cost is a big consideration here.

When it comes to doors, solid is the best route in terms of cutting out noise from adjoining offices and meeting rooms. Glass doors can also work well when they are in a frame and when the glass is acoustic, so there are different options available to match the overall design of the working environment. It is also important to seal the gap above and below the doors and walls as well. The ceiling void often carries the services, and gaps here will inevitably lead to noises leaking into nearby areas. However, great care should be taken to avoid disrupting the ventilation. Here, you would need to use a cross talk attenuator, a large metal cylinder with a lot of baffling round the outside that allows air – but not sound – to pass through.

Noise from reverberation will cause echo and it arises when too many hard surfaces are present. This can be very off-putting, especially in areas where video conferencing is used, but it can be reduced by softening the surfaces. Carpet is better than hardwood floors or vinyl for reducing reverberation, although this option is often not the preferred choice of office designers. Acoustic ceiling baffles will work to some degree, and soft furnishings around TV screens and monitors do also help. Any AV room you may have will contain expensive equipment, so it is vital to discuss noise reduction with your designer at an early stage to avoid it simply becoming an afterthought. Here at Workspace, we ensure that reverberation is considered in the early stages of the design process and that any noise reducing methods are incorporated into our designs from the very beginning.

As Mike Bird, Projects Partner at The Workspace Consultants, reiterates, early consideration of any noise problems is crucial. ‘So often, any considerations around reducing the amount of noise in an office space tend to be more of an afterthought, usually once people are using the space,’ says Mike. “At Workspace, we encourage the client to think about it during the design process so that it can be included in the overall design, leading to a happier workforce in the long run. Poor acoustics are probably the biggest client disappointment on any project, and we want to ensure we understand their requirements so that we can specify the correct approach every time. It is commonly accepted that if the background noise of an office is too high, productivity is likely to suffer so it is an important consideration to get right.’

The Workspace Consultants specialise in office design and project management in Cambridge and London, so if you’re considering a redesign or refurbishment, we can help ensure that you have a quiet workspace with reduced noise levels to help you get the best out of your team. Contact us today for an initial discussion.